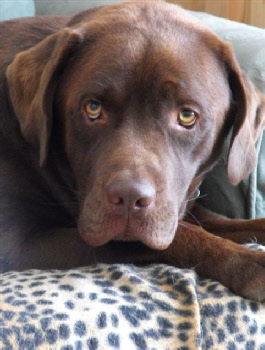 “We wanted an older, quieter, calmer male as a companion for our 2.5year old hyper collie/lab bitch, Rosie.  Rosie was a rescue, and a big challenge for our first dog so I was hoping for an easier ride with my second – but when I saw ‘Bonzo’ , a gorgeous chocolate lab, 2 years old, described as a ‘bit of a bull-dozer lacking in manners’

I decided the specification was really more guidelines, anyway.

We had a home-check and waited anxiously for the results of a cat-test, which he passed with flying colours… and he became our Frank..

We made the 3.5 hour journey to Wales with Rosie, all very excited to meet the new member of our family.  On arrival, we were shown to a yard – and there was our Frank, huge, slobbery, boy, He hurled himself at us in delight, covering us both – and Rosie – in mud. On the way home, new brother and sister travelled happily together. We were even happier, congratulating ourselves on adopting such a happy, confident, dog who was such an instant hit with Rosie.

Back in Hampshire, Frank launched himself over the threshold of his new home in full bull-doze mode. We stood frozen on the doorstep, wincing at the sounds of crashing, banging, breaking and shattering, punctuated with horrified yells from the cats. Frank explored every inch of the house (including the dustbin) like the proverbial bull in a china shop. Later, after everything broken had been swept up, the bin was repositioned outside, and the cats were soothed, I relaxed with an Indian take-away. Frank let me know that he likes to share – by chomping half my food clean off my plate in one gulp. The first few weeks were punctuated with frequent incident as we battled with Frank’s addiction to food. On our walks he took off and gobbled up picnics, tore open passer-by’s shopping bags, or thieved treats from other dog-walkers pockets.  Much to the utter disgust of the cats, he stole daily from their food bowls; despite their new elevated feeding station.  He stole everything and anything off the kitchen worktop; including our Sunday roast. He never missed an opportunity; not even from the bird-feeder in the garden, from the shelf display in the vet’s waiting room, or the condiments  trolley at our local pub. He stole banana’s from my neighbours car-boot as she unloaded her shopping, he pinched sausages straight out of the frying-pan from right under my nose. At one point we considered putting a sign above the kitchen door that read, ‘Franks All  He Can Eat Buffet”.  There is nothing Frank will not eat – one of his recent escapades involved eating a whole tub of Vaseline!

He was placid and easy-going, but he he was very aloof.  He loved Rosie because she liked play-fighting with him, but mostly because she never finished her raw-hide chews. With us, he was friendly but he kept us at a distance, more often than not seeking solitary places in the house to spend his time. He liked us when we fed him, but if we stroked him, he would look at us in confusion.  If we talked to him quietly or tried to cuddle him, he thought he was being restrained and would push us away. One night, about a month after we brought him home, Frank sat beside me on the sofa and suddenly, he leant into me and put his head on my shoulder. My heart was in my mouth, I was afraid if I touched him he would move away. I turned my head and looked into his big amber eyes and his expression was easy to read. “Do I really belong here?”   I cautiously stroked his ears and talked to him quietly, and after a moment he made the noise we now recognise as signalling contentment, and sank down beside me with his head in my lap. In the few short months since we adopted Frank, he’s come a long way. He’s a playful, contented, confident, affectionate soul. Starved of human affection and home comforts for so long, these are now his top priorities in life – after food, of course. The changes we made to his lifestyle and diet have gained him weight, brightened his eyes, and given him a soft,glossy coat. I am constantly being complimented on his handsome looks. He’s not the bull-dozer he was around food; having settled on being more of an opportunist. He loves Rosie, goes all soft when the cats groom his big nose, and adores snuggling up to me on the sofa. We love him to absolute bits!”