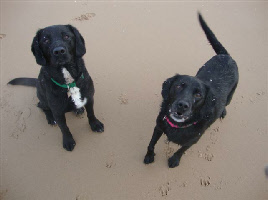 “I had been looking for another Springer Labrador cross for ages when I spotted Arthur (Buster at the time) on DogsBlog.  I already had an eight year old ‘springador’, Millie who I’d rescued as a pup, plus an elderly rescue greyhound called Tom and a rescue whippet called Barnaby but I was very keen to find a pal for Millie who would play with her in her rough and tumble way – sighthounds are delicate souls who don’t like to bounce about the way Millie does.  Arthur looked perfect on the ad so I quickly  filled in the form and crossed my fingers. Homecheck went well so I was very excited when I was passed.

Very sadly, my greyhound had to be pts a few days before my homecheck. I was very upset but it made me even more determined to make the very long journey to South Wales!  The following Sunday, 4.30am, I set off on the seven hour journey with a very sad Millie and Barnaby on board – they were missing Tom.  We eventually arrived at Lizzie’s Barn and introduced the dogs to Arthur.  I knew immediatly that Millie and he were going to be great pals – and they looked so alike too!

Arthur settled in the back seat with his seat belt on and after the first hour of excitement, slept most of the (9 hour with traffic and rain this time!) journey home.  Once back in the frozen North East of England, Arthur met Treacle the cat, George and Penny the bunnies, ten little guinea pigs, Hugo and Angus the tortoises and lots of other small furries and not so furry creatures. Arthur was EXTREMELY excited but very well behaved throughout it all. After the first couple of sleepless nights whilst Arthur settled in, he eventually decided to sleep on the floor in the bedroom – bizarre, given he had the choice of a £200+ plus dog bed!  He still sleeps there, beside my bed, every night. Although  it has been known for me to wake up with a springador on either pillow and a whippet at my feet!

Arthur would run into the sea with her and let her jump on his head!  She (and I!) was amazed the first time she saw him swim underwater – he disappeared from view and reappeared 10m to the left, much to Millie’s confusion and delight.  Arthur has cheered Barnaby and Millie up hugely and although they still dash over to see any greyhound they spot, they are no longer sad about Tom.  Arthur has definatly cheered me up enormously too! Arthur has been to school with me (Im a teacher, not a pupil!) and was really great with the children.  He loved the attention and he was completely reliable with the other small furry and not furry animals at school too. Arthur particularly likes doing lunch duty…lots of dropped sandwiches!  He works off all the calories though- 2 hours per day running around will do that for dogs (but not for me sadly!). Arthur is an amazing dog and I am so pleased I got him – thank you so much. And of course, if you ever get another high energy, springador in rescue, please give me a call!”