A very tough days walking, but a very varied vista, and some lovely things to see

Yesterday was a lovely day. We spent a lovely night with Kate & her family, & her gorgeous labs, we met the delightful Macey, Kate’s latest foster dog- someone will be very privileged to adopt her. Thank you guys.

Soon we shall set off again down the canal towards Salisbury.

A few random pictures from today 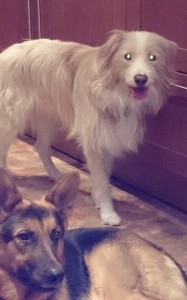 Had a lovely day walking, & now pretty close to Salisbury, looks like our run of lovely hosts & hostesses has come to an end, so night in the tent is on the cards for tonight. I hope those clouds don’t turn into rain clouds!

Saved! – thank you Sally & Barry for having us tonight, we have had a lovely evening & very much enjoyed meeting you and your lovely family.

Yesterday was no fun, today is going to be loads better.

An enormous thank you to Lisa Thrower & her husband for rescuing us, feeding & putting us up last night.

We will soon be off again along the cycle path running from Bath to Salisbury.

A lovely start today. A cup of tea from a canal house boat.
And we met a lovely Podenco -one of the types of dog we are doing this for.

I like boat people. The ones we have met have all travelled widely, here & abroad. They aren’t shackled physically or emotionally. They have opened their eyes to our world & its imperfections, yet they haven’t given up on it.

I’m also shocked at how hard it can be to live their life – not the actual living in a houseboat. But the red tape the authorities place in their way. Some tell me the preference is for holiday rental companies to have priority over moorings, as this is what brings in the money. I wonder if some fat cat is creaming in the bribes again? Gestapo Britain again.

I’ve been offered a stop for the night with the lovely Kate, from Lab rescue, in Southwick, so that will be our finish for today.

I guess it’s goodbye Wales, & hello England!
We have crossed the bridge & are  having our breakfast break in the sun. Here are some pictures from on the way across

Syd & I are musing.over our first Impressions of England, sadly we had to agree, not very friendly. No ‘good morning’s, no cheery ‘hello’, smiles or even waves – except two cyclists ( but they came from the Welsh side, & ride across & back everyday to keep fit, so don’t count).
First time we had trouble buying a coffee – “you can’t bring a dog in here “ the assistant said, ” tie him up.outside” I asked if they allowed children in, “of course we do” she replied. I pointed out children are far less hygenic, & asked if it was acceptable to tie a 3 year old up outside? “absolutely not” she said, adding “someone could harm the child if you did that”. point made I told her, now if I can’t bring Syd in- would you please be kind enough to fetch me a coffee for myself, & a sandwich for Syd? – “but I can’t do that” she said “we are not allowed to do a customers shopping”

A couple of happy pictures from Wales yesterday.

Time to quit this relaxing lark & get moving! 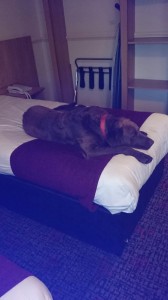 A HUGE thank you to Dot & the staff at the New Inn Motel Chepstow Rd, Langstone, Gwent.

Thanks so much for your hospitality. We had a wonderful meal & a sumptuous night.

SYD & I can’t recommend these Guys enough.
Another beautiful day for walking, shame so much on the road today.
Here are some pictures from today. Roman remains in what is now Caerwent, and my beautiful Syd posing on a patch of daffodils in some poor unsuspecting folks communal garden ( not one daffodil was harmed in the taking of this photo)

Seems I accidently turned the tracker off. Syd finds the road walking very tiring, the pace is slower, the cars, vans & lorries make horrible noises & smells, dogs leap at fences, or run.out shouting at us, there are monsters in.the gutters & verges who.eat you up, And even worse than all that NO.DUCKS!!

Tomorrow once over the bridge we get back to more interesting routes. We follow ncn 4, and incorporating the Bristol & Bath Railway Path to Bath. Not sure how far we will get till we get there!

We have stopped in. Chepstow for the night, thank you very much Lisa & Phil for your lovely hospitality.

Another lovely day for walking, it’s waterbird day today, My companion Syd. is a Chesapeake Bay Retriever, his instinct to work is strong. He finds it hard to walk in a straight line, being drawn to ‘quarter’ the area.
He is also irresistibly drawn to Ducks, in his mind it is clearly his sole duty to retrieve them from whatever body of water they are in. Interestingly this applies only to all species of duck, a few smaller types of geese but not Moorhens, Swans, Herons nor any other birds we have come across.

Had an uneventful night night in a copse just off the cycle track, listened to the most amazing animal sounds ( while Syd snored).

Met the lovely Sue Davey who restocked Syd & i with supplies, and then gave us a lift a few miles, to miss out a rather nasty onroad stretch. So having cheated on that stretch, we are at least alive & not under a set of wheels! We walked through the park in Pontypridd. I rather liked the man & dog sculpture. Took a road bridge over a nasty road main – a new experience for Syd, past another park, & are heading for Caerphilly ( about 6 miles I believe). From there we shall continue on the ncn 4 to chepstow

Mmmmm posted a bit too soon on how well today was going,  but with dodgy path signs, causing a large diversion & grand tour of Pontypridd it began to feel like groundhog day, fortunately we escaped, with both our senses of humour intact.

However to the father of the young lad of maybe 6 years old, from the homeless guy & his dog, (an almost totally white Boxer/ Mastiff),
Syd & myself.

“Instead of taking the opportunity to teach your son a lesson in respect, & compassion to others. In choosing to encourage your little darling to set off his ‘cap’ gun repeatedly & close to both dogs, you chose to teach him that it doesn’t matter, that one’s own actions have no consequences to others. It is downright wicked, totally thoughtless & cruel to make such explosions near to dogs. Let alone the elderly lady who almost fell over in fright – I doubt you even saw her.

You may also be interested to hear that by condoning such behaviour you have increased the likihood of your son behaving inappropriately with / around amimals in the future- the result is he is more likely to be bitten as a direct result of his actions.

Fortunately both dogs were unconcerned, but many would be at best startled & at worst very very afraid.

Syd & i think this is much more like it.

A few more shots from today. Tonight we have a bed, courtesy if the lovely Hannah, & Sue Davey or arranging it.

Hannah has given me a much nicer route to Newport, along side the canal, for tomorrow as well. 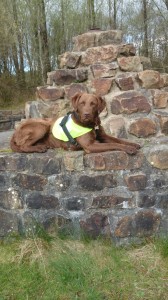 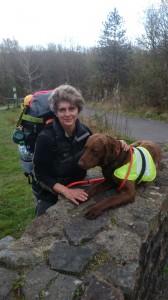 We met a lovely couple, with their golden retriever, who are running the London marathon on Sunday.
They kindly took a picture of Syd & I at the memorial to the 112 men who died in a mining disaster here.

It’s looking decidedly spring like out on the trail. I wonder, is there a reason why so many early wildflowers are white or yellow? 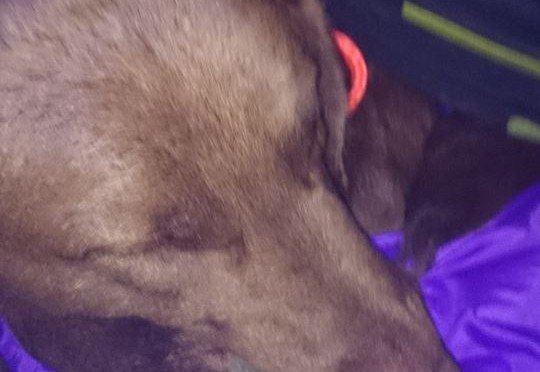 I’ve wrapped Syd in my waterproof jacket so he doesn’t get soaked, despite my best efforts, without pegs & proper guy ropes, the tent is sagging inwards, we are going to get decidedly damp tonight 🙁 ,  but at least I know Syd will stay dry. 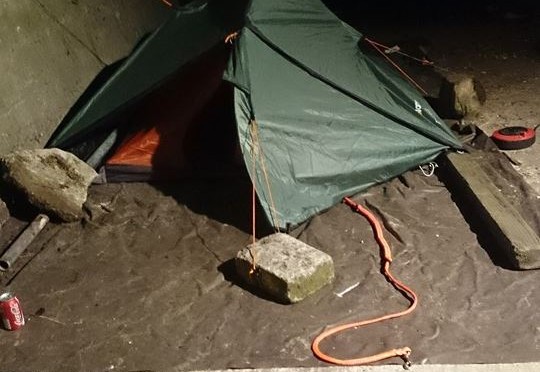 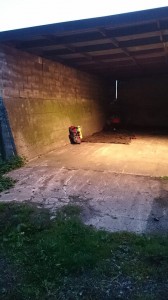