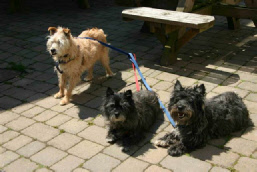 “I adopted Teddy (the yellow dog, on the left of the picture) from you nearly three years ago. His name was Charlie then. He had come into rescue because of the serious illness of  his previous owner. He had lived with her for the previous three years, and before then had lived in another rescue centre. He was estimated to be eight years old. He now lives with my cairn, Pippa (centre), and for the last year he also has a brother Mac (cairn cross westie, on the right of the picture), as well as my three cats. I hope it’s fair to say he has a happy home now. We all go camping several times a year, and next month will all be going to stay in Devon in a lovely dog-friendly hotel. Teddy has his own Facebook page, where he has 82 friends!

He’s a great dog, full of character and very faithful. I’m very happy that he came to live with me.”