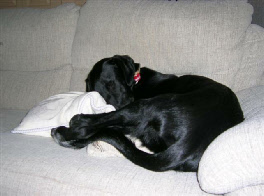 I adopted Wills on 18th September 2010, having been looking for a companion for  my female, 6yr old German Shepherd cross Milly. On the day we met him he came bounding out with the other dogs, they ran straight past us but Wills came straight over and introduced himself with a big hug.

He travelled so well in the car, it was a 5hr drive and he slept nearly all of the way, he was so quiet I had to keep checking he was still there. He has bonded so well with Milly, far better than I had expected and so quickly. I love watching them run around and play together, they happily share toys and play tug with them and will curl up together to sleep.

I have been working with both dogs on their recall, Wills works very well to the whistle and has been a good influence on Milly with her recall. When he goes out for walks he is very friendly with everyone he meets and in return people are very taken with him.

He has completed a puppy university course with the Puppy School  and has recently achieved his Bronze award for the Good Citizens Scheme.   During the initial settling in period we had a few issues with chewing but he can now be left for a couple of hours if need be and is well behaved.

He has fitted in so well here, I am so glad he is part of our family.”